The Republic of North Macedonia’s legal framework enshrines some basic protections against arbitrary detention, and some safeguards to prevent and reduce statelessness. However, although it is state party to the 1954 Convention, there is no mechanism by which statelessness can be identified or determined, and no stateless protection status. The only routes to regularisation for a stateless person are to apply for temporary residence as a ‘foreigner’ at the discretion of the government or to apply for asylum, both providing only very limited rights. There are some protections in law from arbitrary detention, including the right to free legal aid and effective remedies to challenge detention, but people detained are often not made aware of their rights in practice.

There is a provision in law for children born on the territory to stateless parents or parents of unknown citizenship to automatically acquire North Macedonian nationality, but this focuses on the status of the parents rather than the statelessness of the child, so does not prevent statelessness in all cases. There are safeguards in law to prevent statelessness among foundlings and children born to Macedonian nationals abroad. Although not set in law, there is good practice of protecting Macedonian children adopted abroad from statelessness. However, there remain significant barriers to universal birth registration. The country has received four Universal Periodic Review recommendations on this issue and there is strong evidence that Roma, Ashkali and Egyptian communities are disproportionately impacted.

The Republic of North Macedonia’s record on international and regional treaties is relatively good, in that it is party to the 1954 Convention and most other relevant international and regional treaties, including the European Convention on Nationality, with no reservations. However, the most significant gap in relation to statelessness, is that it is not state party to the 1961 Convention nor to the Convention on the Avoidance of Statelessness in Relation to State Succession.

The Republic of North Macedonia collects some limited data on statelessness. It includes a category ‘without citizenship’ in its census, and census data is disaggregated. However, the census was last carried out in 2002 so is out of date and it does not include people whose births are not registered. Other government departments use potentially overlapping categories, such as ‘unknown nationality’. The government does not publish data on refugees and asylum seekers, nor on stateless people in detention. UNHCR carried out a mapping study of statelessness among Roma, Ashkali and Egyptian communities in 2011, covering 70% of the territory.

The Republic of North Macedonia has a definition of a stateless person in national law that aligns with the 1954 Convention, but it does not have a legal framework in place to protect stateless people. There is no mechanism to identify or determine statelessness and no stateless protection status. The only route to regularisation for stateless people in North Macedonia is an application for a temporary residence permit as a ‘foreigner’ at the discretion of the government or a claim for asylum. Rights given to those granted temporary residence are limited to primary education and a right to apply for citizenship after six years’ legal residence. Access to healthcare may be possible, but health insurance is required. Police checks on foreigners are frequent.

Other routes to regularisation

There is a basic legal framework for immigration detention in the Republic of North Macedonia, however, there are few protections against the arbitrary detention of stateless people. Statelessness is not a juridically relevant fact in the decision to detain and there is no requirement to define a country of removal. There are no alternatives to detention prescribed in law and no information on how other less coercive measures are considered; nor are there periodic reviews of the decision to detain. There is a time limit on detention and remedies available in law, but detainees are not made aware of them in practice. No documentation is issued on release leaving most with no rights (except primary education) and exposed to re-detention, unless they apply for asylum or a temporary residence permit.

Macedonian law contains some partial safeguards against childhood statelessness, but there are gaps. There is a safeguard for children born on the territory to stateless (or of unknown citizenship) parents to automatically acquire citizenship, but this focuses on the status of the parents rather than the statelessness of the child, so does not cover children born to parents who may have a nationality but cannot confer this to their child. The provision also only applies to minors, which is a lower standard than in the 1961 Convention. Children adopted by or born abroad to Macedonian nationals are protected from statelessness, as are foundlings. There is no legal provision preventing statelessness in the case of a Macedonian child adopted abroad, though a safeguard is applied in policy and practice. There are significant barriers to birth registration, which impact disproportionately on Roma, Ashkaeli and Egyptian communities. The process relies on parents presenting at a registry office and being documented. Late registration is possible in law but is a very cumbersome procedure in practice that presents insurmountable barriers, particularly for marginalised communities. Four Universal Periodic Review recommendations have been received by the country on the issue of access to birth registration. 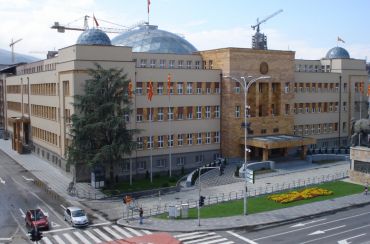 On 3 January 2020 North Macedonia acceded to the 1961 Convention on the Reduction of Statelessness.
7 Jan 2020 / International and Regional Instruments / Macedonia 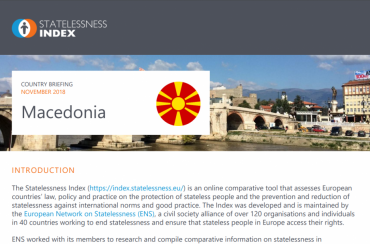 In 2018, the Government of the Republic of North Macedonia made a welcome public commitment to addressing civil registration challenges that...
26 Mar 2019 / Detention / International and Regional Instruments / Macedonia / Prevention and reduction / Statelessness determination and status / Statelessness population data