Positively, The Netherlands is party to most relevant international and regional instruments, but there are some gaps in its domestic legal framework to protect stateless people and prevent statelessness. The definition of a stateless person in Dutch law is narrower than the 1954 Convention, and without a statelessness determination procedure (SDP) or status, there is limited protection for stateless people in the country. Although a legislative procedure for an SDP is planned, currently statelessness can only be identified through other administrative procedures. If identified, legally residing stateless people may be granted a travel document and access to nationality, but there is no route to protection for those without legal residence. Although the law contains some protections and safeguards against arbitrary detention, stateless people without legal residence are at risk of detention.

There are safeguards in Dutch nationality law to prevent statelessness in the case of foundlings and adopted children. However, the safeguard for children born stateless in the Netherlands is not automatic, requiring either registration as stateless and three years’ legal residence, or five years’ legal residence (if not registered as stateless), before a child can acquire nationality. Children born to unmarried Dutch fathers abroad are also disadvantaged. The law provides for universal, immediate birth registration, and all children are issued with birth certificates; but in practice, undocumented parents may struggle to meet documentation requirements and the procedure for late birth registration is very complex.

The Netherlands has a strong record on accession to the relevant human rights instruments. It is party to all four of the core statelessness conventions, although it does retain reservations to the 1954 Convention, it has committed to removing these. It is state party to all other relevant regional and international treaties, except for the Convention on the Rights of Migrant Workers. Its reservations to the Convention on the Rights of the Child do not directly impact on statelessness but may impact on stateless children in the country.

There is a definition of a stateless person in Dutch law, but it is slightly narrower than the 1954 Convention definition and there is no dedicated statelessness determination procedure, although the parliament is currently considering legislation in this area. There are two possible administrative procedures for a person to register as stateless depending on whether they are legally residing in the country. Both have significant gaps in terms of access and flaws in the assessment process, and neither confer 1954 Convention rights and protections. Identification as a stateless person does not lead to permission to stay, though a legally residing stateless person who registers may have access to a travel document and a facilitated route to naturalisation.

Alternative administrative procedures through which statelessness can be identified

Stateless status and other forms of status

Dutch law provides for some procedural safeguards and limited protections against arbitrary detention, but there are significant gaps. Although it is set in law that detention should only be a last resort and there must be a real prospect of removal, statelessness is not considered a juridically relevant fact in decisions to detain and a country of removal is not required to be set prior to detention. Alternatives to detention exist, but reports suggest these are not fully considered prior to detaining. There is a time limit, a right to legal aid, judicial oversight, and rules governing the redocumentation process, but there are barriers to accessing legal assistance in practice and no legal status is granted on release, putting people at risk of immediate re-detention.

Full safeguards are in place in the Netherlands to prevent statelessness in the case of foundlings and adopted children, but there are gaps for other stateless children born on the territory or to Dutch nationals abroad. Some aspects of birth registration law and practice are also problematic, with strict deadlines, documentation requirements and a complex late birth registration procedure. The provision in Dutch nationality law for children born on the territory who would otherwise be stateless is not automatic and requires continuous, legal, permanent residence of at least three years, as well as proof of the child’s statelessness. Children born to unmarried Dutch fathers abroad are also disadvantaged by a requirement that the father officially acknowledges paternity before the child is seven. 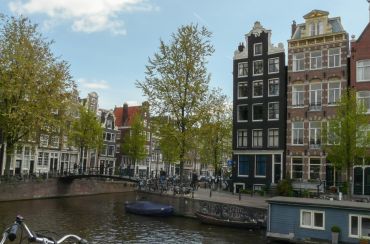 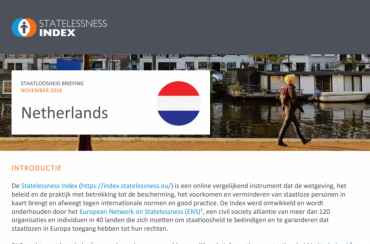 There has been little change in the Netherlands over the course of 2019. There is still no route to protection under the 1954 Convention, as proposed legislation that would lead to progress in the identification and protection of stateless people, as well as the prevention of statelessness, is yet to progress through parliament. Stateless people without legal residence are at risk of arbitrary detention and the new Law on Return and Immigration Detention, which places an investigative duty on the authorities to consider alternatives to detention, is still pending in the Senate. It is regrettable that the Dutch Government did not deliver a concrete pledge to address statelessness at the occasion of the UNHCR High-Level Segment on Statelessness in October 2019 in Geneva.

New information was added to the Index on access to nationality for stateless people in the Netherlands, showing that naturalisation is facilitated for stateless people to some extent through reduced residence requirements (three years instead of five) and fees, and the requirement to produce a passport is waived, but there are also significant barriers, such as a requirement to produce a birth certificate. The 2019 Index update also includes updated population data and new information on birth registration, highlighting some positive practice such as the issuance of birth certificates to all children and the separation of nationality determination from birth registration, notwithstanding remaining obstacles to late birth registration.