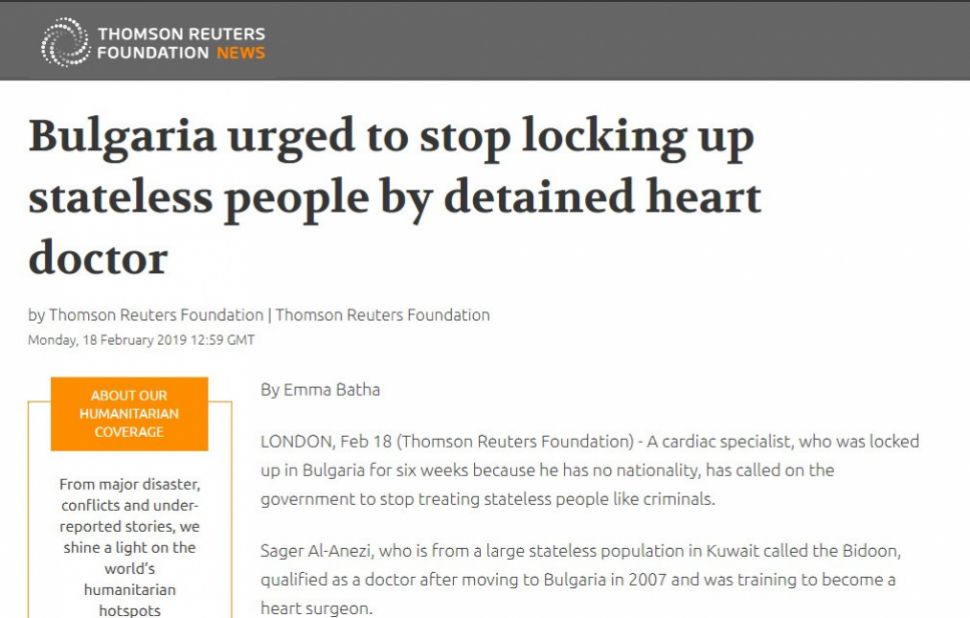 While Bulgaria has a statelessness determination procedure that should serve to identify and protect stateless people, crucially the system doesn't offer full protection from detention, and it fails to guarantee stateless people all their rights under the 1954 Convention.

In particular, the StatelessnessINDEX analysis shows that gaps in Bulgarian law, such as the absence of procedural safeguards and the lack of a requirement to identify a country of removal prior to detaining someone means that people without a nationality can face long periods in detention for removal without any realistic prospect of ever leaving the country.

This was highlighted in a news report by Thomson Reuters which focused on the detention of Dr Sager Al-Anezi, a stateless man represented by the Foundation for Access to Rights – an ENS member and #StatelessnessINDEX partner. Sager was abruptly taken from his vital work as a doctor and locked up simply for lacking a nationality. With no country willing to accept him he has was locked in detention for six weeks and only released on Friday.

"I've been treated worse than a criminal, but I don't know what my crime is. How can you lock people up simply for having no citizenship?"

Sager's story illustrates the risk of harm and waste of human potential caused by a flawed system which needs urgent improvement if Bulgaria is to fulfil its obligations under international law.

All European states have obligations in international law to protect stateless people and prevent statelessness yet, in many cases, these have not been fully translated into effective laws, policy and practice at the national level. More than half a million men, women and children in Europe are falling through these gaps and we hope that by shedding light on this problem through our StatelessnessINDEX we will be in a better position to work with key stakeholders to make a real difference to the lives of stateless people.